Quantum communication and its emerging impact on society 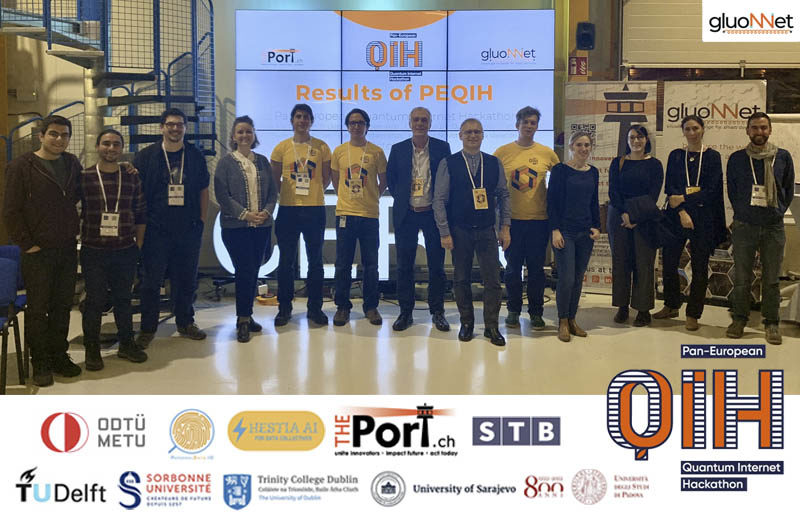 In the spirit of emerging technologies using quantum communication, the pan-European quantum internet hackathon (PEQIH) initiated by TU Delft, took place on November 5th and 6th in six cities across Europe at the same time, such as CERN’s IdeaSquare in Geneva, on finding new paths to secure data using quantum key distribution.

For 48 hours, some of the teams focused on developing a new version of Open SSL using quantum key distribution, while two teams in Geneva, hosted by THE Port at CERN IdeaSquare, committed their work on a complementary approach for developing a Quantum Virtual Private Network (QVPN) and discussed its implications on society.

The teams in Geneva have been actively supported by mentors as CERN IT Department Communications officer Mélissa Gaillard, CERN openlab’s scientific associate Fabio Fracas, Mary Georgiou, Bilge Demirkoz, the private data researcher Paul-Olivier Dehaye and human rights practitioner Christophe Peschoux. Lively discussions between participants and mentors revealed that the quantum communication revolution paves its way already now to all sectors of society and not as generally assumed in the near future. This exchange stimulated the participants even more to find a way to emphasize a more secure data transfer than already existing. Ideally, communication and encryption of keys are in an entangled quantum state, whereas the data would be transmitted as classical bits.

Real-life applications have been taken into account, such as the data transfer between companies requested by an individual person which is possible because of the GDPR. So far, the majority of existing companies has not explored these possibilities due to the lack of secure transfer, but now this will become available. One team developed in only two days a prototype of a QVPN using quantum key distribution for the key exchange. The other team considered the impact on how quantum key distribution might change business culture and the main goal was to create a scenario in which multiple companies have access to quantum keys and how this access might look.

But this is not the only possible application one may think of when using a QVPN. Further applications might include remote conferences, such as meetings or hackathons, or even chats and communication between airplanes and satellites or ground stations.